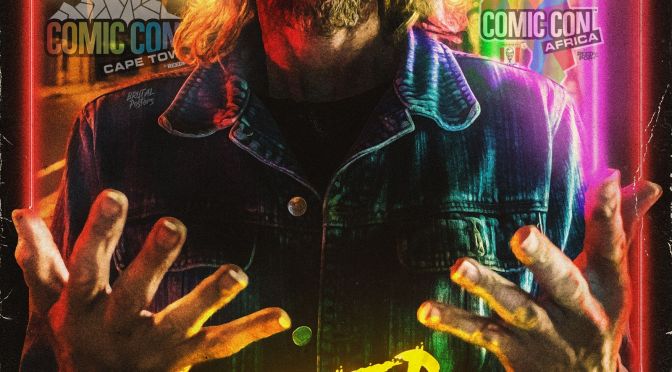 Let me back it up a bit. Barry is the most unlikely of heroes; a drugged out, selfish absentee father. During a binge, he is abducted by aliens, prodded and probed (in a grotesque but gorgeous sequence) and returned to Earth with an alien helming his heroin riddled body. Now, I’ve never dropped acid so don’t take my word for this, but after the abduction the movie plays like an acid fueled, grotesque alien nightmare. Erratic editing, ominous music, which swaps out with pulsating techno music and the beats in the film are as anxious as the beat of the music- like living inside a techno song. The movie becomes almost a living, breathing thing.

It’s a bit Lynchian, for the vast majority it does not follow a traditional narrative structure, and it makes perfect sense that director Ryan Kruger has a background in directing music videos and that Fried Barry grew from the seeds of a very successful, experimental, conceptual short film. It is quite pretty and Gary Green as Barry turns out to be, dare I say.. perhaps quite likable? After some exploration and further into the film, back to the question, why is South Africa so horny? Maybe it’s just Barry, and we are on this journey with him and so we experience the world through him, on his drug fueled alien body invasion. Or maybe… when you are abducted by aliens, you become very sexy. Releasing pheromones into the air and everyone you encounter is utterly defenseless against them. Personally, I like to think it’s the latter. One thing is for certain, this film is a wild ride and a visual feast that will stay with you.

Fried Barry is available to screen on demand during the run of Fantasia Film Festival, August 20th – September 2nd get your ticket here

One thought on “Fried Barry: Sex, Drugs and Alien Abduction (Not Necessarily In That Order) [Fantasia Film Festival 2020]”