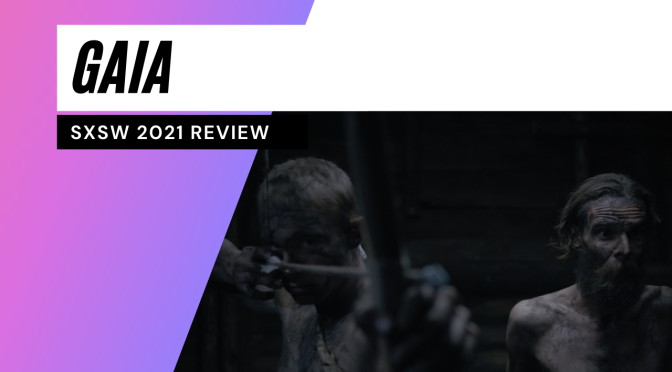 Tertius Kapp and Jaco Bouwer’s Gaia is a South African eco-horror with plenty of monstrous fun lurking deep in the jungles. When park rangers Gabi (Monique Rockman) and Winston (Anthony Oseyemi) embark upon a routine surveillance mission in a primordial forest, they are quickly thrown a curve ball when the drone Gabi is piloting comes face to face with a human and is struck down. Gabi insists on retrieving the drone, which Winston wisely warns her against, saying something akin to “sometimes you are just like those white folks”, as in the must-go-and investigate horror movie trope. In spite of Winston’s initial instinct, Gabi insists and he appeases. As she searches for her drone, Gabi encounters a father and son duo living off the grid, in a post-apocalyptic fashion. They are covered in mud, for the most part dressed only in loincloths and armed with homemade weapons.

While it initially seems this movie might be in the vein of Deliverance it takes a turn more akin to elements reminiscent of Annihilation complete with strange spores drifting through the air. The newly formed trio is forced to fend off attacks from strange jungle creatures and Gabi begins to learn more about the reasons behind the father and son’s existence in the jungle. There are a good amount of creature effects and body horror, invoking bits of The Ruins along with disturbing psychedelic nightmares. This cautionary sci-fi tale dealing with humanity choosing its own demise hits a little too close to home as fantasy and reality collide in the form of a potentially rapidly spreading threat that could manifest in multiple forms- be it climate change, disease, violence, a stark reminder that the list is potentially endless when it comes to the multitude of ways in which we hurt ourselves.